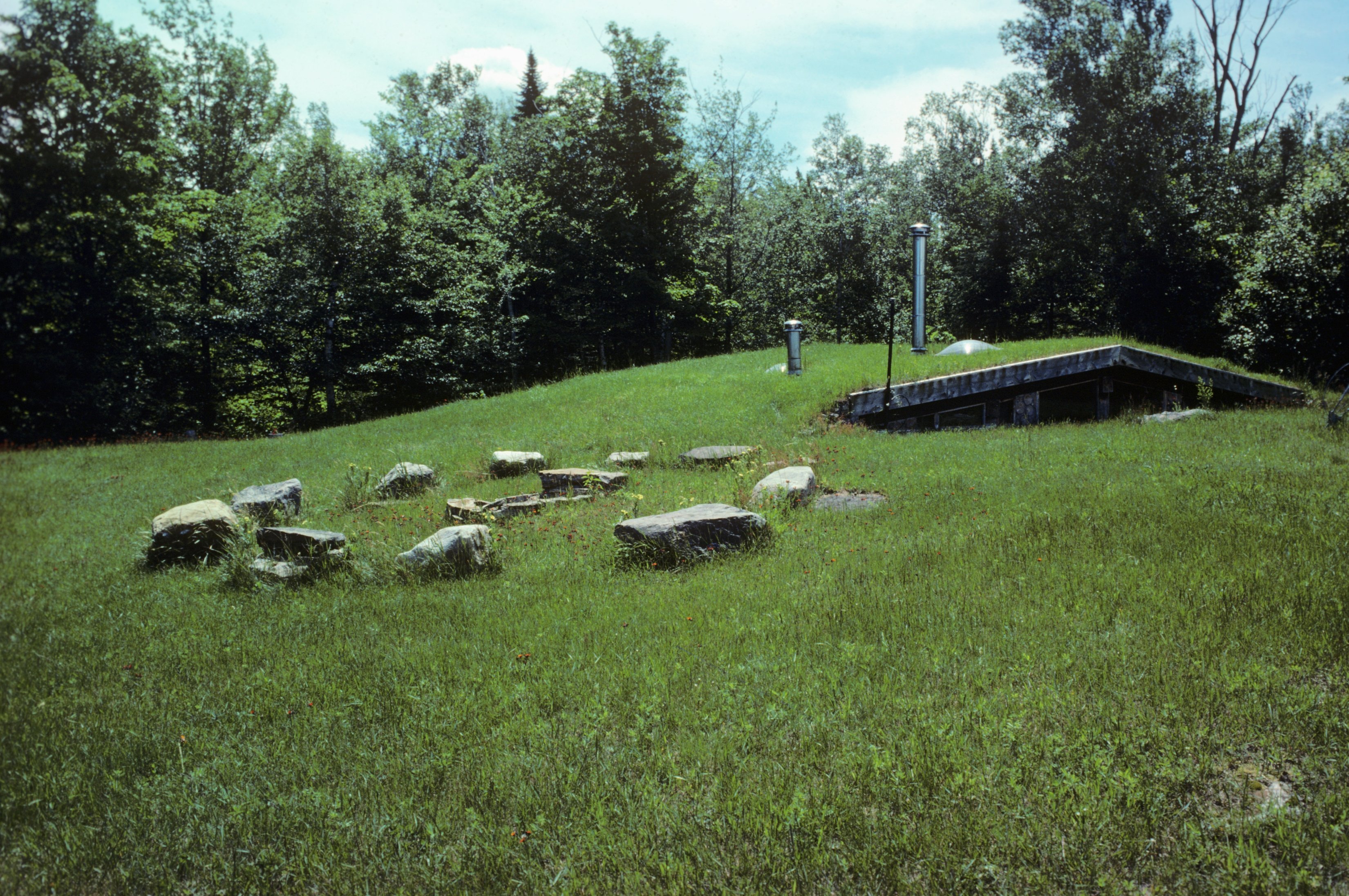 (Earth-sheltered housing and living roofs are covered in detail at our Earthwood Techniques workshops and in our Earth-Sheltered Houses book.)

Thirty years ago, these two topics were kind of lumped together as “underground housing.” I even had a couple of books out with that term in the title. In reality, there are very few truly underground houses. However, the energy-saving advantages of earth-sheltering a house – as opposed to burying it underground – are very similar, with much greater design flexibility.

“Living roofs” is often treated as a separate topic nowadays. Lots of structures have living roofs, particularly in Europe, without being earth-sheltered. Conversely, one can build an earth-sheltered house without a living roof. (Although they do go nicely together.) Perhaps some definitions would be helpful.

Earth-sheltered housing … refers to placing earth up against certain walls of the house to create a more favorable climate from which heating and cooling can take place. In the north, we generally earth-shelter the northern wall and, perhaps, a good bit of the eastern and western walls. This is called berming and the earth thus placed is known as a berm. In the south, where cooling is the primary energy consideration, berming might be done on the southern side.

A living roof … is one which allows or promotes growing various vegetations, such as grass, wild flowers, sedum, even leafy vegetables. Instead of converting a thousand square feet (or more) of the planet to dead lifeless tarscape – think New York City – we can return that part of the planet to living, oxygenating greenscape, with habitat for millions of tiny yeasty-beasties.

(Thankfully, even American cities are beginning to include living roofs now.)

Our personal experience with earth-sheltered housing (and living roofs) goes back to the building of Log End Cave in 1977-78. This was an elevational building; only the southern side had access to the outside. In fact, a design fault of the building was that it had only one means of entrance and escape. This is not only a code violation, it is stupid. A chipmunk has more sense.

The south side Log End Cave, our first earth-sheltered house.

The north side of the house shows the full extent of the earth-sheltering. The east and west berms support the living roof.

Jaki plants the living roof on the Hermit’s Hut guest house at Earthwood.

We built an above-ground cordwood sauna at Log End with soil and grass on top, our first experience with a “free-standing” living roof; that is, unsupported by berms.

These experiences were combined at the round two-story Earthwood house, which we built in 1981 and moved into in 1982. Here, 40% of the cylinder is earth-sheltered, most of that on the northern hemisphere. There are three doors for escape, as well as several opening windows. The house is very easy to heat on comparatively little fuel, but this is a function of several factors working together: earth-sheltering to create a more favorable heating (and cooling) environment, the round shape (least skin area to enclose desired living space), 16-inch cordwood masonry walls, southern orientation, and, finally, heating with a 23-ton masonry stove, the most efficient way of burning wood.